To share your memory on the wall of Earline Shabkie, sign in using one of the following options:

Provide comfort for the family of Earline Shabkie with a meaningful gesture of sympathy.

Print
Earline Shabkie, 94, of Greenville, wife to Joseph Shabkie for over 30 years prior to divorce, passed away at her home, surrounded by her family and loved ones on June 4, 2019.

Born in Twelve Mile, Pickens County, South Carolina. Earline... Read More
Earline Shabkie, 94, of Greenville, wife to Joseph Shabkie for over 30 years prior to divorce, passed away at her home, surrounded by her family and loved ones on June 4, 2019.

Born in Twelve Mile, Pickens County, South Carolina. Earline was the fourth child out of six, born to Columbus and Floride Childress. She attended Pickens High School, class of 1941, and continued to organize her high school reunions until she turned 92.

One summer during her high school years, she picked blackberries, and sold them to a cannery, and made a lot of money. That was the beginning of her career with money and she has loved working and making money ever since. She was in plays in school, and was voted best looking in her 8 th grade class. She went to Mountain Grove Baptist Church every Sunday growing up.

She met the love her life, Joe Shabkie, when he was stationed in South Carolina during World War II. They married in 1944, forming the passionate union of a Lebanese immigrant and a southern belle.

They settled on Rockwood Drive, in Greenville, and later on Stonehaven Drive, in a house that Earline designed and decorated. Soon after, she gave birth to two of her children, Donald and Jean. She had a third child, Eva, later in life at age 47.

After her divorce, Earline worked as an office manager and bookkeeper, and sold World Book
Encyclopedia for years. She worked sometimes three to four jobs to make ends meet as a single mother to her third child, and singlehandedly put Eva through college by working day and night as a salesperson and caregiver. Even with this, Earline managed to cook fresh vegetables most every night and stayed up late helping Eva with homework.

Earline had dreamed of becoming a teacher throughout her active life. She loved to study and learn, and returned back to school in her late 80s, to Furman University’s Olli Program.

She never stopped discovering, learning, reading, and deepening her faith. Every decade of her life brought a new personal discovery. She became passionate about politics in her early 80s, and until a few weeks before her death, she called her children at the end of most days and gave them a run down of the day’s political news. She hated Donald Trump as much as she hated the devil.

In addition to spiritual literature, she loved reading fiction, nonfiction, and biographies. “The Power of Your Subconscious Mind” was one of her lifelong favorite books, but she had recently read “Jane Eyre” and Michelle Obama’s biography. She loved to highlight passages from books and refer to them to give her days meaning and keep her mind occupied.

She passed on her love of reading to her children and everyone around her. She lived a life of strength, perseverance, humor, purpose, and devotion to God. She was constantly on the go, surrounded by throngs of friends her age and younger, all who enjoyed her magnetic personality. She was highly intelligent, loved deeply, and listened intently. She loved God, her children, her friends, and lived her life with dignity, grace, and humor. She adored flowers, birds, and all things beautiful. She is beauty to her family. She will never be forgotten and her legacy will continue in the world she made better every day she was on it.

The family wishes to thank Dora and everyone at Compassus, and Mary Arnold, who was such an amazing friend and caregiver for many years.
Read Less

Provide comfort for the family by sending flowers

Show you care by sending Flowers

We encourage you to share your most beloved memories of Earline here, so that the family and other loved ones can always see it. You can upload cherished photographs, or share your favorite stories, and can even comment on those shared by others.

Ava Childress Crisp, Love, Carolyn and Family, and others have sent flowers to the family of Earline Childress Shabkie.
Show you care by sending flowers

Posted Jun 08, 2019 at 10:15pm
Don, Jean and Eva, we are sorry to hear about your Mother passing away. She was truly a beautiful, vivacious southern lady. I loved working with her at World Book. Our conversations in later years were always a pleasure. She radiated pride and joy when talking about you three and her grandchildren. I loved reading every word of her obituary. She is smiling now, too. Love and prayers to all of you.
Harry and Judy Stancil
Seneca, SC
Comment Share
Share via:
LF

Love, Carolyn and Family purchased the The FTD Comfort Planter for the family of Earline Shabkie. Send Flowers

Posted Jun 08, 2019 at 08:24am
With deepest sympathy and love to you, Eva. I'm thinking of you today as you honor your amazing mother XOXO-Nellie

Nellie Perera purchased the The FTD Comfort Planter for the family of Earline Shabkie. Send Flowers

Posted Jun 07, 2019 at 07:33pm
In loving memory of our dear Aunt Earline. Sending words of comfort to the family who loved her dearly and are sad to see her go. 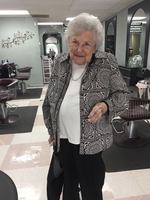